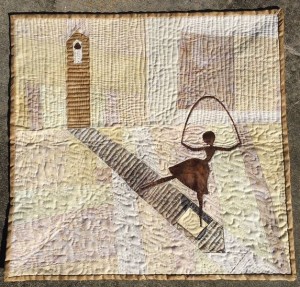 In September of last year, the Tampa Modern Quilt Guild took a field trip to the Dali Museum, in St. Petersburg, FL.This was the new location, as the museum had recently moved. Many members, including myself, had not visited the museum yet.

And there was a special exhibit at the time called Marvels of Illusion.  The main piece was a special effect that took your picture and added it to a mosaic.  The special exhibit was inspired from “Gala Contemplating the Mediterranean Sea Which at Twenty Meters Becomes the Portrait of Abraham Lincoln (Homage to Rothko)” created in 1976.  We quilters saw a quilt in this! Everyone was very inspired from the visiti to the museum.  We decided to create a mini quilt/pillow challenge based on what we saw at the Dali. 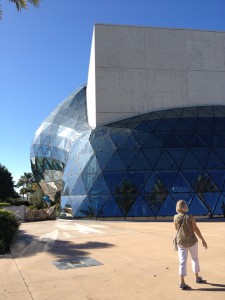 Having gone to art school, I knew about Dali’s work and some of the pieces that were not included in the museum.  There wasa piece I found pretty significant, that wasn’t on display. Which I didn’t believe it would be, it being a digital piece.  In the 1940’s Walt Disney contacted Salvador Dali to create an animated short.  It was originally planned to be in a sequal to Fantasia, as a short on its own to music.  However, at the time Fantasia did not do well in the box office and the squeal along with many beautiful shorts was cancelled. Below is a sketch from the original storyboards. 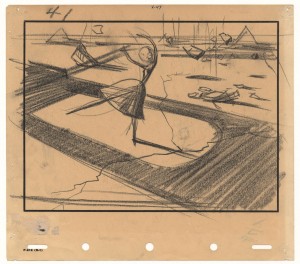 But what I believe is one of the most wonderful things about Disney is their archives. They keep absolutely everything.  And recently, they stumbled upon the concept and sketches.  And this time, the animation was created.  It wasn’t part of the second Fantasia which came out in 2000 (Fantasia 2000).  But it was created beautifully to stand on its own.  Below is a still.  You can view the animation here. 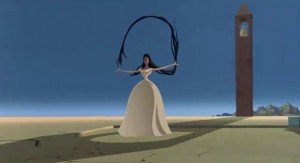 This is what I wanted to create my mini quilt from.  The movement and dance of the woman, the morphing of her into flying and the bell shape really stuck with me.  I wanted to recreate her and the environment.  Every quilt I do I try to challenge myself with something. Since this was a mini, I did a few challenges. I challenged myself to use low volume prints for the background and an improv manner.  I call it semi-improv since I used a whole bunch of patchwork to create the landscape, but need to secure the bell tower and shadow.  and then I used my Brother Scan N Cut for the first time to create the woman. It took a few tries to get the tension right, but when it did the machine cut her perfectly. I then did free motion quilting on my home machine.  I tried different ways to add texture and keep with the perspective of the shot. I did a simple outline of the dancer so she would ‘pop’ off the quilt! I am very happy with how this mini turned out.  And lucky me, my guild chose mine as the favorite from the challenge although there were many wonderful quilts displayed.