It’s been a little over a month since MegaCon in Orlando this year, and  I am finally at a point where I can take a breath. MegaCon this year was very odd. A good experience, but odd nonetheless. Let’s see why! 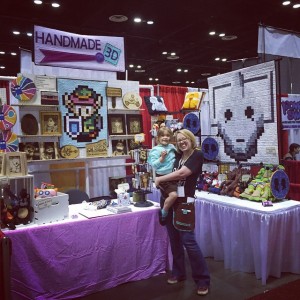 We have done very well in the past years attending this show. This was our fourth year.  Each year we had done incredibly better than the previous year.  This year we made nearly the exact same amount of the previous year.  And I did a lot of prep for this year’s MegaCon.  I made 10 of nearly ever plush I sell. So I was utterly exhausted and burnt out by the time MegaCon came around.  I was expecting the same type of sales as we normally did. But this year was different. Don’t get me wrong, we did good. Just not what we were expecting.

For one, there is this game out called Five Nights at Freddy’s.  I had received a commission for Foxy earlier in the year. From that single Fox many f my students told me to sell them at MegaCon.  I thought it was a little goofy, but always looking to add new items I figured I would give it a shot. Well the shot worked and exploded.  I made 25 plushies, 5 each of Foxy, Freddy, Chica, and Bonnie.  I was able to get them on the ‘exclusive’ page for the MegaCon website. i had no idea how popular this game was.  We sold  6 of them in the first twenty minutes when we opened on Friday.  One guy literally ran up saying “I found you!” By Saturday afternoon we were known as the Five Nights at Freddy booth. People were telling their friends to come find us. We had one Freddy left and four Chicas.  Sunday morning we had one Chica, and he was gone within the first hour.  I had all intentions of keeping this an ‘exclusive’ to MegaCon.  Really, I did. They are a lot of work compared to the normal plush I make. But we couldn’t believe how many people came up asking about them. And wanting them after a specific character was sold out. (Foxy was the first to go by the way!) But people just kept coming! So Sunday I started taking orders and received a few. 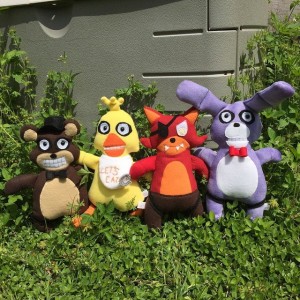 Then I put the listing up on Etsy the next day, because I had kept handing out cards saying you can get them online. I received 11 orders in the first week. Multiple orders a day! From a dormant sleeping Etsy shop this was crazy!  Since MegaCon I have received 55 orders! That’s orders! That doesn’t count the multiple plushies in most of those orders! Again, Foxy is the favorite. Next comes Bonnie, Chica, and last but not least Freddy. So as you may believe, I got a little overwhelmed. I took the listing down about a week ago to catch up.  I was so afraid of not hitting the shipping deadlines with orders just kept coming.  The listing sets three weeks before they are shipped out, but I hadn’t planned on so many orders at once!  The listing is now back up! Now I have a better handle on how to organize, manage, and output these types of orders.

So getting back to MegaCon and the odd parts: We sold all our Freddys, that was great. I sold nearly all of my Groot’s and about half of my Rocket Raccoon’s. And that’s literally about it.  Maybe a handful of other guys. One turtle, a couple doctors, a couple Hulks. Which is also weird, Hulk never sells and I didn’t even make more of him since the last con. I think I have one left. I had a ‘Misfit’ box that held some of my old narwhals, iron man pillows, and a few random monsters. That box was marked at $10 each and I sold nearly the whole thing.

I did get three commissions, which was exciting! This Troupple from Shovelknight and this Arty Dog, an artists own drawing. I never get commissions so that was fun.  I have a third one I should be mailing out next week, but cannot show yet. 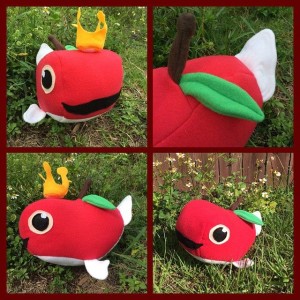 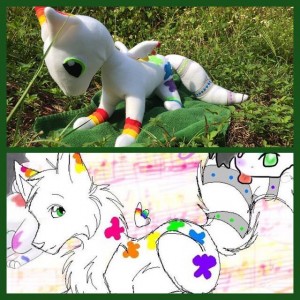 I barely sold any of my wall hangings. Jay’ wood burnings brought lots of attention, but he didn’t even sell any of his big pieces until the Sunday of the show. We tried something new for our quilt giveaway. We bought prints of some of our best sellers. If you bought a print, you were entered in to winning the quilt. This way you walk away with something.  We sold enough to make the cost of the quilt, but not what we were hoping for. On Sunday that was practically the only thing we sold, print after print.

We still had lots of fun at MegaCon. We got two autographs for our Doctor Who book. The commission I am still working on is really amazing. We were interviewed for a podcast. We will be back at MegaCon next year, but we are taking a big risk.  If you do go to MegaCon and haven’t heard, next year it will be Memorial Day Weekend (2016) and a four day show.  Our normal booth setup we do went up almost $200 in price. Granted there is an additional day, but we couldn’t afford that.  We will have an end cap in Artist Alley. So that means a different setup than normal. Should be interesting. If we don’t do well there next year, it will be our last. Here’s hoping it will not be.